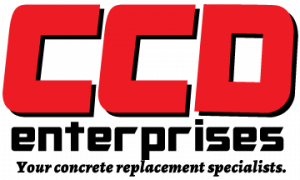 CCD Enterprise did an amazing job on the foundation for our new garage and driveway. I highly recommend them!!!
-Robyn, Homeowner
Thanks for such a good job! It looks great :)!! Tell your crew we appreciate their hard work, too!
-Susan, Homeowner
Troy and CCD Enterprises have been my “concrete and keystone wall guys” now for several years. I have recommended them to friends and family. Their prices are fair, the work is excellent, and they clean up when finished. Plus Troy’s just a good guy to work with.
-Thomas L. Campbell, Campbell Management

Menu
How long before I can be on my new concrete?
You can walk on your new concrete in 1-2 days. It is best to let the concrete set 7-28 days for anything heavier. Concrete is approximately 70% cured in the 1st 7 days and fully cured in 28 days. The longer you stay off the concrete; the more durability you will get.
What causes concrete to crack?
Generally, cracking is caused by poor sub-grade conditions. Either the sub-grade was not prepped correctly or moisture is getting between the sub-grade and the concrete, causing the sub-grade to get soft. Freezing/thawing is another common reason for concrete to crack, not to mention driving heavy equipment on it.
How long should a driveway last?
A driveway should last at least 10 years. However, several factors can contribute to a shortened lifespan. Some of those include: proper installation, maintenance, ice melt, having the driveway sealed, caulked joints and washing off road salt in a timely manner.
How fast can you get the job done?
Most residential jobs take about 2 days. (For example: We can tearout, set grade, form and pour on day 1. We can saw cut control joints, strip forms, clean up, and backfill on day 2.)
How much does a driveway cost?
This depends on many factors. These include: how big the driveway is, how thick the new concrete is to be poured back (either 4″, 5″ or 6″), rebar or no rebar, broom or swirl finish, tooled joints or saw cut, curb grind, rock base, caulk the joints and/or seal the driveway.
What are some ways to protect the concrete to help it last longer?
Wait as long as you can to drive your vehicle on new concrete. Seal the concrete with a quality penetrating sealer, which repels water and contaminants. Caulk the control joints of the concrete. Control joints are placed to allow the concrete to crack evenly. By caulking the control joints, you’re sealing the joints to help keep water from penetrating the concrete and compromising the sub-grade.
What pour the concrete 5" or 6" thick compared to 4" thick?
The thicker the concrete, the more weight per square inch it will support.
What does rebar do?
Rebar adds extra strength to the slab being poured. Rebar does not keep concrete from cracking. Rebar will help the slab stay intact if or when the concrete does crack.
Broken Windshield?

Despite the cause, experts say car owners responsible for cracked windshields

KEARNEY, Neb. — Driving down the road and the vehicle in front of you throws up a rock or debris, cracking your windshield. Who will foot the bill?

Experts said despite where the debris came from, you’re the one responsible. “That [other] car isn’t intentionally trying to shoot the rock at your windshield,” said Kearney Farmers Insurance agent and owner, Brandi Simonson. “Nobody else is liable. It’s something that your coverage would kick in and pay for. A lot of times even those bigger commercial vehicles that do have rocks will say, ‘Stay this many feet behind’ because they do know that there is going to be rocks thrown as they’re driving with that gravel.”

Repair shops warn fluctuating temperatures, like Nebraska is seeing this week, causes these chips and cracks to spread quickly. “The glass just fluctuates and that’s what causes the cracks,” said Kearney Safelite store manager, Kelly Fairchild. “If you wait, there’s contaminants that get in it so if you get water in it and it freezes and it warms up when it freezes it can make your windshield crack.” She said, if your vehicle does get hit, timing is critical. “The sooner you get them the better you’ll have the repair turn out,” said Fairchild. “Anything that is smaller than a quarter or less than 6 inches, we can normally fix.”

The Safelite store manager said anything larger will most likely require a windshield replacement.

“If there was a commercial tint that was put on the vehicle when it was made or there was a camera put in and those need to be replaced, it will all be put back to the standard that it was,” said Simonson. “Now, if you chose to have your windows tinted on your own tint, then that’s something that wouldn’t be covered.”

In order to avoid paying, you’ll want to make sure your insurance policy includes window repairs and replacements, now. “If you do get a rock chip or you need a windshield replaced and say it just happened that morning, if you don’t have the coverage its not going to cover that specific one,” said Simonson.

She said all insurance policies and providers are different, but at Farmers Insurance glass coverage is about two to five dollars, depending on the make and model of the vehicle.